The Rodeo of the Ozarks began in 1944 by a group of Springdale men and women led by founder, Shorty Parsons. World War II was at its height. People were working hard and around the clock. Entertainment and relief from the unrelenting headlines were much needed. The idea of having a rodeo was born.

Hosting a rodeo was a perfect outlet to get rid of the stresses during hard times. Springdale was always a patriotic town and on the Fourth, the city park was always gaily decorated. The town band played, there were old fiddler’s contests, potato races, pie-eating contests, and fun was had by all. With the war almost over, there was even more reason to celebrate and a rodeo would be a natural way to share the excitement. Shorty agreed to be the promoter but they needed community sponsors. The Clarence E. Beely Post of the American Legion and the Chamber of Commerce stepped forward and rented the area behind the sale barn for $50.00. We were off! The dates were set: Sunday, Tuesday, and Wednesday, July 1, 3, and 4. Walter Watkins, Kirby Beeler, and Luther Johnson took charge of a caravan to travel to eleven towns in the area to promote the rodeo. Shelby Ford and Hays Miller made talks at each stop.

B.B. Brogdon was Parade Marshall when the parade rolled around. There were 200 horses in the parade along with the late “Doc” Boone and the original Hill-Billy Band. It rained out the show Sunday so it went on Monday. The very first year, everything went wrong. The north side bleachers collapsed on Wednesday and sent 300 people to the hospital, none seriously injured. Springdale’s own Glenn “Pup” Harp won the steer roping.

When the spring of 1946 rolled around, the town, under Mayor H.D. Ewalt, was ready. They named the event the “Rodeo of the Ozarks.” The dates were July 2, 3, and 4. Harp was named arena director and Harry Williams managing director. But they wanted to make it bigger and have a professional rodeo. The Chamber of Commerce agreed to back it but was afraid to take the financial risk. Back to Shorty Parsons again – he agreed to be producer and promoter and take the gain or loss. Everyone went to work. Shorty borrowed $29,000 to finance a permanent grandstand for 5,500 people. Don Hoyt, the Chamber Secretary, invited Governor Ben Laney. There was $42,500 raised by subscription for prizes for the parade. Prize money for the rodeo was set at $2,000. Bryan Work and Bob Sharp were in charge of tickets. They did such a good job that their sales were not exceeded until 1962 — 16 years later! There were 8,000 people at the parade containing over 600 horses. Performances were sold out! It made money! 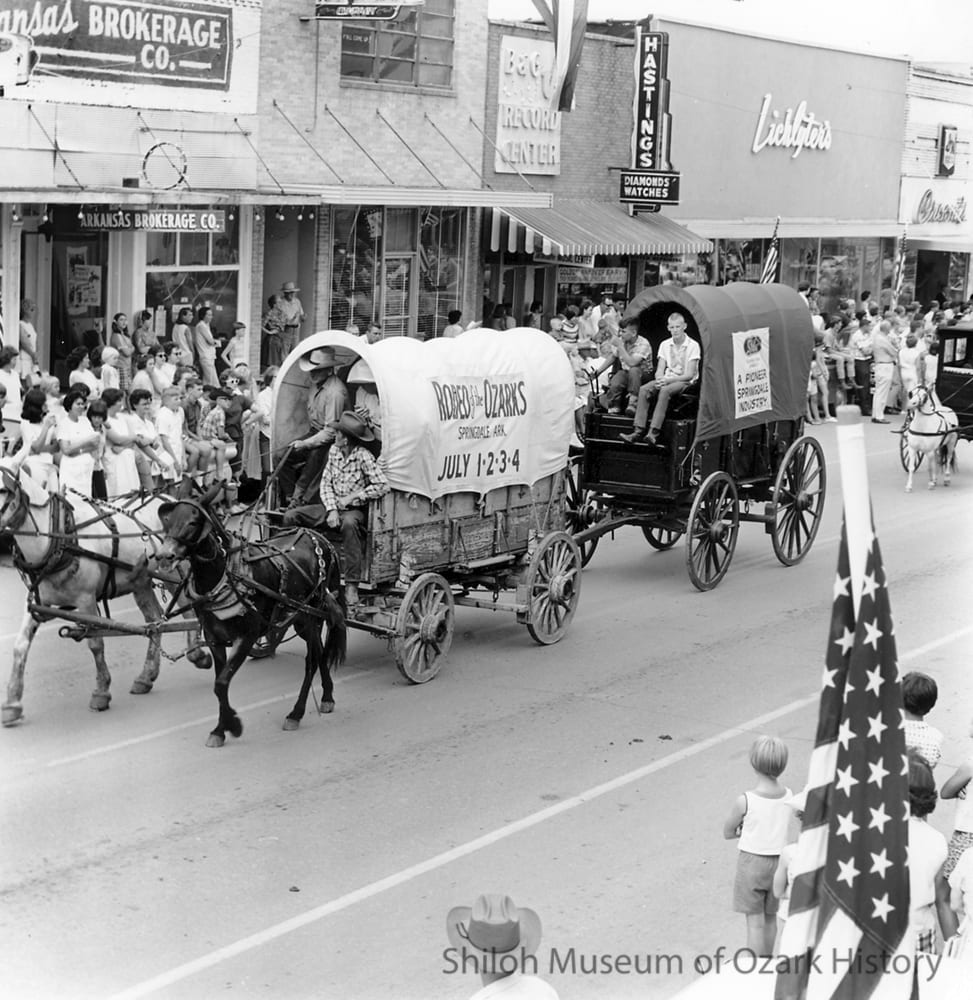 The Rodeo Finds Its Home

A year later, Bob Sharp was President of the Chamber of Commerce. The Chamber wanted to see a permanent rodeo organization. Bob contacted Shorty who said that he would sell the grounds and the arena to the city if they came up with a plan. This group selected a four-man committee of Bob Sharp, Chairman, Luther Johnson, Howard Ewalt, and Fay Stafford. The result — the Springdale Benevolent Amusement Association organized in February 1947. To get it going they sold “stock” to companies and individuals for $25 per share. The charter members elected Harvey Jones as President the first year. The 1947 show was again a huge success. In 1948, Ed Maestri was manager of the Chamber of Commerce. He recruited new people and interests. John Tyson was elected President. Again the Rodeo of the Ozarks was tops. It looked like a permanent affair. In 1950, they came back to the father of the show, who had been working on it every year, and asked him to be President. Shorty agreed. He served as President of the Rodeo of the Ozarks until his death in 1988. The Association borrowed $32,000 to complete seats around the arena. The prize money was increased and the show continued to grow.

This year at the same location, the Rodeo of the Ozarks will be presented again. There are differences, though. From small wooden bleachers and hand-rigged bucking chutes made out of oak timber cut just days before to steel holding pens and specially designed chutes, steel under-framed bleachers seating more than 10,000 each night and parking for hundreds of cars. But despite its growth and changes to accommodate the times, one thing that you will find unwavering is the patriotism, passion, and pride for the country and people.

Experience the best at Parsons Stadium!